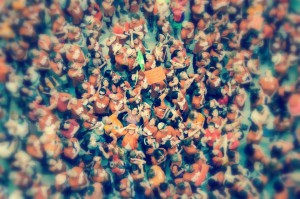 On June 25th, Wendy Davis engaged in a filibuster to stop the ALEC-backed Republican drive to strip the people of Texas of their access to abortion and other reproductive health care.  I was in the Capitol Extension when the Republican’s third attempt to shut her down succeeded and women spread throughout the building surged toward the Senate Chambers.  We began to roar.  Over the next few minutes, history was made. The proceedings struggled to continue, stymied by the noise. Though a vote was finally taken, it was after midnight and the session was technically over.  Confusion arose, so the Republicans changed the clock to say the vote was complete by midnight and the Second Special Session was closed. This is how it goes down in Texas.

Luckily, some trusty photographers had photos of the vote and the clock and were able to prove that David Dewhurst was lying.  So the Republicans were forced to call a Third Special Session that would require hearings and action by both Houses again.

It was here that a new phase of work began. ACT initiated a meeting with close to 70 people from many groups who agreed to form an anti-racist, anti-oppressive, reproductive justice direct action initiative. Rise Up Texas was born and quickly began to organize to include those voices previously left out of the debate and to prepare for nonviolent action.

Rise Up worked hard to coordinate and collaborate with all the various forces, but found ourselves marginalized again and again. What a shame. Opportunities like this do not often arise and when they do, it is so important to pursue them. In the end it became clear that our goals were different.  The more mainstream groups saw the filibuster itself as the victory and began working to position Wendy Davis to run for Governor.  Our goals were to make sure that the Legislators and public new about the impact on poor, rural, and marginalized communities, and show that the people of Texas were not going to take this lying down but that we were rising up and fighting back.

The stories go on and on about all the hearings and testimonies, the all nighters, the great actions – shoes, drums, letters and more, singing “We’re Not Gonna Take It” as an anthem, tampon-gate, Dewhurst lying about protestors smuggling in shit, that they completely missed the chains that allowed some brave young women to lock down with painful images of the consequence of illegal abortions.  Then there was the nonviolent sit-in, dispersed brutally by police, several were tased and two were taken to the hospital, one needed for stitches in his head.  There has been no consequence yet for any of this. Despite the brutality Rise Up mobilized when the Governor prepared to sign the bill into law – we silently held the space for those who could die as a result of their actions and then we wailed and wailed so he could not sign the bill in peace.

Our work made international and national news with stories and images in major dailies and new station.  The women of Texas did not take this lying down and we are continuing to organize to turn this around.

The Alliance of Community Trainers is a small collective that works with broader networks of trainers, allies organizations and projects. ACT offers knowledge, tools, and skills to individuals, organizations and communities to empower sustainable transformation.
Designed by illuminatheme.com. Powered with WordPress